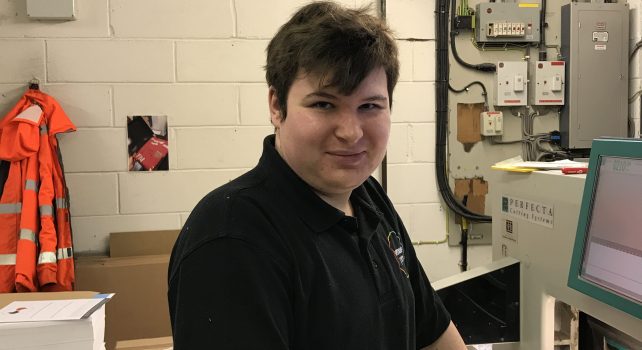 Tyler Joined us in September this year as our Print Finishing Apprentice, for us it is a great opportunity to give some one a great start in the industry which is often perceived as old fashioned. In reality print finishing has become computerised automated and a very technology driven industry. Settling in well Tyler is already operating some machines and being trained in all aspects of the bindery in tandem with his Level 2 NVQ at Yeovil College. We thought it would be nice for him to introduce himself and give a flavour as to how he came to join Remous Print!

Hi, my Name is Tyler Moreton, I am 17 years old and a Print Finishing Apprentice at Remous Print.

After the completion of my GCSEs I didn’t have much of an idea in terms of what to do next, but I was keen to find an apprenticeship so I could learn new skills and earn a bit of money at the same time. My granddad works in the print trade at Westlands and informed me of this apprenticeship at Remous. And although initially I was concerned due to not knowing much about the trade and how it all worked, I thought it was a great opportunity and soon applied for the job. In the mean time I spent some time looking into print finishing via Google and Youtube and was surprised to see that it was different from my expectations.

On the 29th of August I had my interview In which I met Alan and Steve and I was delighted to have received an email a couple of weeks later informing of me of my success in fulfilling the position. And as of now I can say that I’m really glad I decided to apply in the first place. I am learning brand new skills everyday, all of which are applicable to what I do.

Outside of work I really enjoy gaming. I play various games on my Xbox One and PC and I thoroughly enjoy attending gaming conventions such as Insomnia and Vidcon!